For research help reach out to us on Live Chat and receive your Outcome Analysis Report (O.A.R.).

LAT inFORMER Throwback Edition: ‘Notice Sufficiency’ – Where Are We Now?

In February 2020, challenges to notice sufficiency were trending at 1 in every 8 cases based on reported cases that were released prior to 2020. With the release of further 2019 cases, this became 1 in 7.

With a considerable number of 2020 decisions being released through to May, the trend becomes even more pronounced, now 1 in every 6 decisions, increasing total challenges to date lifetime from 189 to 244 decisions. 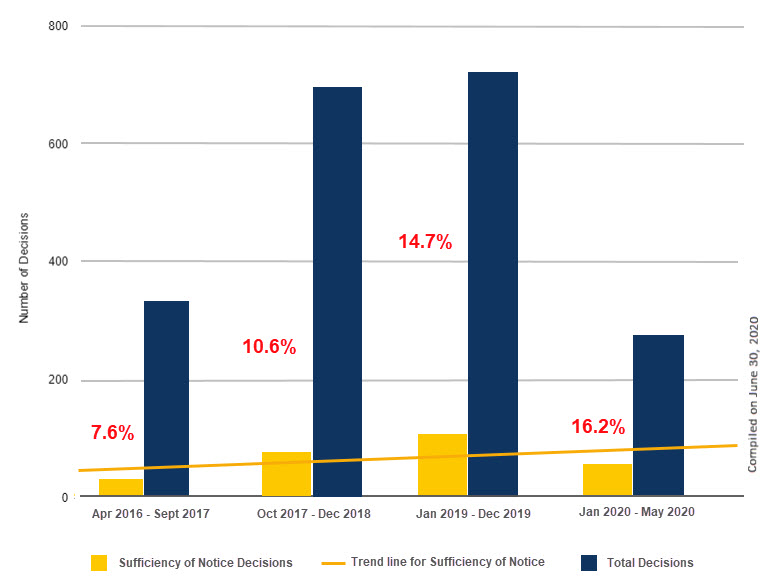 Follow the emerging trend from our special throwback edition of the LAT inFORMER as we bring you back to the watershed moment in September 2017 that gave rise to ‘Notice Sufficiency’ cases.

1 in Every 8 Decisions Consider ‘Notice Sufficiency’ 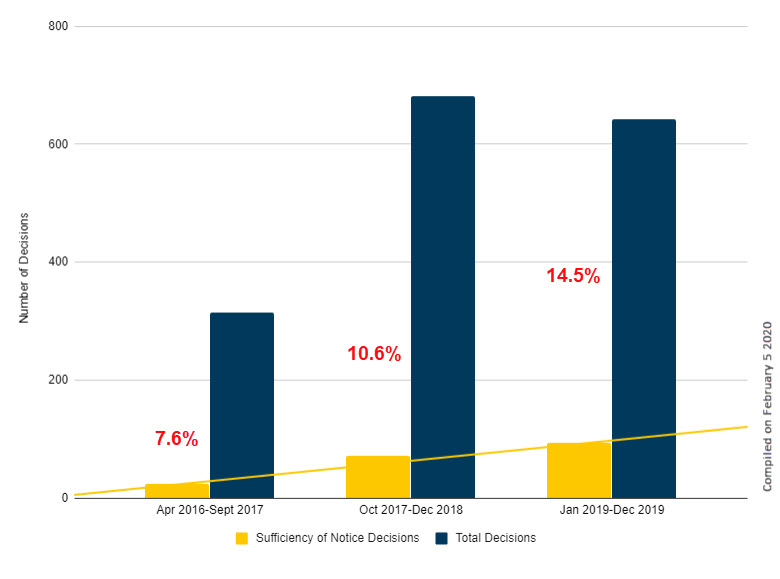 In September 2017, Executive Chair Lamoureux released M.F.Z. & J.C.C. v Aviva (16-000517 & 16-000663), a reconsideration decision upholding an earlier decision that had found the insurer’s denial was “unclear” and “meaningless”. This decision was endorsed by the court in September 2018 on a qualified basis. The Court noted that the consequences of the non-compliance only apply to the OCF 18 in question.

Notice sufficiency was further addressed in M.B. v Aviva (16-002325), a reconsideration decision released in December 2017 that made clear medical reasons should include specific details regarding the insured’s condition that form the basis for denial, or identify information the insurer requires. The reasons need to be clear enough to allow an unsophisticated person to make an informed decision regarding IE attendance.

In September 2019, the Court in Hedley v Aviva affirmed that a denial notice was not clear and that medical reasons must allow one to decide whether or not to challenge a denial. They cited “mere boilerplate” statements that fail to provide a principled rationale to which one can reply “constitute no reasons at all”.

Since the release of the September 2017 recon, the numbers are telling us that ‘notice sufficiency’ has in fact become yet another significantly increasing transactional cost.

Within this context, we highlight two instances in which there appears to be a different interpretation of notice requirements, one where medical reasons were not required, another where there were no consequences for deficient notices, as well as a deficient notice that resulted in 11 months of IRB being payable.

In 18-004905 v Certas, the Tribunal noted that the Respondent “consistently took the position that [the Applicant]’s injuries were predominately minor injuries, as defined by the Schedule, and therefore were treatable within the $3,500.00 limits of the MIG.” It was found that with each denial, the Respondent based their position on available medical documentation, and “critically, advised [the Applicant] that the lack of compelling medical evidence establishing that [the Applicant]’s injuries were not predominately minor injuries formed the basis for its denials. It is clear under s. 38(9) that taking the position that the MIG applies is a valid reason for a denial.”

In a similar scenario, 18-010015 v Aviva, the Tribunal found that the IRB denial notice “gives medical and other reasons as required by advising that ‘the disability period appears to be inconsistent with the diagnosis or mechanism of injury’.”

In each of the above two cases it may be anticipated that another adjudicator could well have a different take on the sufficiency of the notices provided.

No Conjuring Required – In 18-008774 v Allstate, the Respondent terminated IRB based on the Applicant having returned to work. The Tribunal found that “terminating an IRB because an applicant returned to work is a perfectly valid ‘other’ reason that does not require a medical component.” The Tribunal noted that they were “not sure how the notice could have been any clearer…(and) [the Respondent] does not have to conjure or fabricate a medical reason…”.

Notice Insufficient – Nothing Payable – In 19-000782 v TD Insurance, the Respondent was found not to have delivered a sufficient notice in two instances, having failed to refer to the MIG. However, for the first plan the Applicant had not incurred any of the goods and services proposed, and in the second incurred prior to the 11th business day, the window in which the Respondent is obliged to reply. Therefore, in neither instance was anything found payable.

A Misguided Refusal – In 19-002670 v TD Insurance, the Applicant, who had been deemed CAT, returned to work and indicated that he did not need assistance with his daily tasks. Accordingly, the Respondent denied further IRBs and housekeeping benefits. However, subsequent to this, the Applicant’s condition deteriorated, and he sought reinstatement of both benefits. The Respondent as a result requested the Applicant attend various IE’s to assess entitlement. The Applicant refused, arguing that the IE’s were only scheduled to bolster the Respondent’s evidence, suggesting that the timing of the IE’s amounted to “trial brinkmanship”.

The Tribunal found the timing and rationale behind the IE’s to be reasonable, given the sudden allegations of significant deterioration, noting that the Applicant had returned to work for over three years. Dealing with notice sufficiency, “I fail to see how any of the notices provided by [the Respondent] were deficient, especially since [the Applicant] was able to decide whether or not he should attend and chose not to. I find his non-attendance to be somewhat misguided.”

What Kind of Doctor Are You? – On reconsideration in 17-008249 v Aviva, considering IE notice compliance, the Applicant argued that the denial notice failed to provide sufficient information about the proposed IE assessors, namely their designation, and did not include valid medical reasons. In the original decision, the Tribunal had found that “the applicant could have ‘reasonably ascertained’ the designation of the regulated health professional who would conduct the examination.” The Vice-Chair however agreed with the Applicant that the Tribunal had erred and granted the reconsideration request on that basis and therefore did not deal with the alleged lack of medical reasons.

In this matter, the notice was “missing the regulated health profession to which [the assessor] belongs. Although this may be a technical oversight, not all individuals with a ‘Dr.’ prefix before their names are medical doctors and/or qualified to conduct an orthopaedic assessment.” Finally, the Tribunal found that one could not “reasonably ascertain the regulated health profession to which [the assessor] belongs.” Further, if they could “it is not up to the applicant to find out the information that the insurer was to provide…(and) [t]he Tribunal should not assume that an applicant would be able to ascertain information that was missing.” As a result, the Respondent was unable to rely on s.55(1)2 to bar the Applicant from proceeding and the Applicant is entitled to IRB withheld for the period of December 3, 2015 to October 11, 2016.