For research help reach out to us on Live Chat and receive your Outcome Analysis Report (O.A.R.).

Entitled to ACB, but No Payment Required

Entitlement was confirmed, with each of the following 4 cases meeting that aspect of the test for ACB. However, in each instance, the test for “incurred” was not met, nor were any of the providers doing so in the course of their regular profession. Further, there was found to be a failure to properly account for what specific services were actually provided.

$19K+ ACB in Error to be Repaid – In an earlier decision 16-002023 v Unica, the Tribunal had found that the insured was unable to prove that the ACB provider, his mother, had sustained an economic loss. “The Applicant failed to prove that [his mother] was searching for employment at the time of the accident and was unable to continue to search for employment as a result of caring for [the Applicant] and therefore unable to meet his burden under s. 3(7)(e) of the Schedule to prove that [his mother] sustained an economic loss.”

In the case at hand 19-006165 v Unica where the insurer commenced an application to seek repayment, it was found that ACB was paid in error, based upon the insured’s representations to the insurer, and as a result, over $19,000 in ACB needed to be repaid. Addressing the insured’s arguments that the repayment request was made in bad faith, the Tribunal noted that neither party had sought reconsideration or judicial review of the earlier decision, therefore saw “no reason to interfere with the Tribunal’s determination”. It was noted as well that the insured’s mother had also received IRB herself for the accident as she was unable to work due to psychological impairments sustained as a result of the insured’s injuries. Further, “where [the insured] has failed to provide evidence of economic loss or a job search on two separate occasions before the Tribunal and despite repeated requests from [the insurer], I can only conclude that no such evidence exists.”

Employed CAT Requires ACB – In 18-008988 v Security National, the Tribunal considered a claim for ACB for a litigation lawyer, deemed CAT, who nevertheless continues to practice. While noting that “the optics of this matter may seem unusual” as the Applicant, who experienced catastrophic cognitive injuries, has “returned to an intellectually challenging vocation” as a litigation lawyer, the Tribunal was satisfied that the injuries sustained “cause the applicant to require assistance as a result of fatigue, forgetfulness, and irritability.” Therefore, the Applicant was entitled to $803.99 per month in ACB.

Despite this finding, the Applicant was not entitled to any payment for ACB services provided to date. There was no evidence that the service provider, or the Applicant’s wife was providing a service she would normally do in the course of her employment, occupation or profession.  Nor was there evidence of economic loss to satisfy the “incurred” definition. Further, there was insufficient evidence to show that services provided were those recommended in the Form 1.

CAT Does Not Get ACB – In 19-000175 v Intact, the Applicant, deemed CAT, was not entitled to ACB as he had not demonstrated how the care was provided or that the provider, his wife, sustained an economic loss. Firstly, the Applicant failed to prove on a balance of probabilities that ACB services were provided, noting that in over three years the Applicant made only two expense submissions. One represented 6 months ACB, the other 33 months ACB. The Tribunal found that the 39 “invoices” (Tribunal’s emphasis) ultimately were identical and devoid of the required specifics as to what was allegedly incurred. They were found to be “incredibly vague” and “provoke more questions than answers.”

The Applicant’s wife, terminated from her employment due to the company’s bankruptcy, nevertheless argued that she sustained an economic loss. She contended having had every intention to return to work, being unable to do so due to the need to provide care. However, there was “no evidence before the Tribunal that [the wife] was actively seeking employment or was forced to turn down employment as a result of providing care.” Further, she also had a knee replacement surgery during the period in question that would have hindered her ability to provide care for at least several months.

Retiree, not Employee – No ACB – In 19-004854 v Aviva, the Applicant was found not to be entitled to ACB, as he failed to demonstrate that the care was provided by a professional service provider or in the alternative that his wife sustained an economic loss in providing care. On the evidence, the Tribunal found it was uncontroverted that his wife was in fact a retired nurse. There was no evidence or an affidavit indicative of her being accredited or providing services as a nurse, that she was actively engaged in a job search for same or that she was forced to turn down employment in order to provide care.

Dealing with the claim of an economic loss, there was neither evidence provided in this respect, nor was there a breakdown of the services allegedly provided. Further, the Tribunal found that the submissions for ACB in excess of $23,000 both exceeded the monthly maximum by a considerable amount and was also far in excess of the Form 1 submitted.

To-date, the Applicant has been successful in seeking CAT assessment in 57% of the cases, with a resulting delta of 14% as compared to the Respondent. 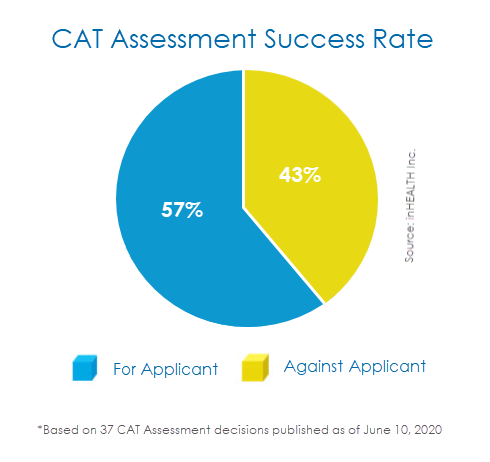 The complexities surrounding CAT determination assessments are reflected in the following case in which a CAT assessment requested 17 years post-accident was found reasonable and necessary.

Despite there being no OCF-18 submissions from 2003 through 2016, the Tribunal found a CAT assessment dated August 2017 to be reasonable and necessary, citing the fact that the Respondent had secured its own CAT IEs.

CAT Assessment 17 Years Post MVA – In 18-012030 v Aviva, the Applicant, injured in a December 2000 MVA sought a CAT assessment in August 2017. Originally seeking assessments totalling $28,702, the Applicant reduced their ask to $18,000, with the Tribunal ultimately awarding assessments totalling $14,000. The Respondent for their part argued regarding reliability/credibility/causation issues, referencing the fact of there being no OCF-18 submissions from 2003 through 2016.

The Tribunal however pointed to eight references of chronic pain in the records of the family doctor between 2013 through 2016, with a single mental health attendance in January 2017, in addition to a 2006 psychological report. More importantly, the Tribunal found it significant that the Respondent had secured its own CAT IEs in the spring of 2017. Although it was confirmed that the Applicant was not CAT, “this suggests the insurer considered the applicant’s claim as warranting further investigation.”

Given the relative scarcity of potentially MVA related issues from 2003 to the date of assessment, one is left to ponder whether absent an insurer’s CAT assessment, the Tribunal would have decided this matter differently.