For research help reach out to us on Live Chat.

Discoverability and Tomec Once Again

In an interesting sequence of events following an 2003 accident, the Applicant presented for the 2nd time a claim for ACB upon being deemed a CAT in January 2015. Without referencing the original ACB denial in March 2012, the insurer proceeded to request two IEs in May and June of 2016 and agreed that ACB was payable, upon submission of receipts.

However, when the related expenses were subsequently submitted in November 2017, the insurer denied the ACB/Housekeeping in December 2017, referencing the earlier 2012 denial. In comes Tomec…

AB CAT Discoverability Continues – In 18-003622 v Co-operators, the Applicant, injured in a 2003 accident, sought ACB via submission of a Form 1 in March of 2012. The Respondent denied same, noting that no ACBs are payable for expenses incurred more than 104 weeks after the accident. Subsequently, in January 2014, the Applicant sought CAT determination, ultimately being deemed CAT in January 2015. In May and June 2016, the Respondent, not referencing the earlier 2012 denial, required the Applicant to attend two IE’s regarding ACB entitlement. Following same, in July 2016 the Respondent advised the Applicant that “attendant care is reasonable under hygiene and feeding. The monthly amount allotted is $456.68 and the services must be incurred…”

However, despite a further December 4, 2017 letter confirming payment upon submission of receipts, on December 18, 2017 the Respondent advised the Applicant that it was relying on its March 2012 denial and refused payment of attendant care and housekeeping benefits. The Tribunal noted that “the denial letter was sent before the determination of catastrophic impairment. This is similar to the facts set out in the Tomec case…The question the Tribunal needs to consider is whether the limitation period commences from the date of catastrophic impairment designation or from the date that benefits claimed, based on that designation, are denied.”

The Respondent contended that “[the Applicant] knew he was catastrophically impaired within the relevant time period, yet he still failed to commence his LAT Application within the two-year limitation period.” This, in context of being deemed CAT January 2015, yet not filing with the LAT until April 2018. The Tribunal however did not agree that the limitation period began to run January 2015, as “there was no denial of benefits after the applicant was found to be catastrophically impaired.” Concluding, the Tribunal found, “the applicant was denied benefits, which were based on his catastrophic designation, on December (18), 2017 at the earliest. This is when the respondent sent a letter to the applicant advising that it was relying upon its March 29, 2012 correspondence as its denial of attendant care and housekeeping benefits.” Therefore, it was found that “the applicant filed his appeal with the Tribunal within the two years from being denied certain benefits after having been found catastrophically impaired.”

So far in 2020, 4.5% of all hearing decisions have resulted in awards being granted. Historically, we saw in 2017/2018 2% of decisions with awards granted. This spiked dramatically in 2019 with 4% of decisions attracting awards. It seems that this upwards trend therefore continues, on track for yet another increase in awards granted… 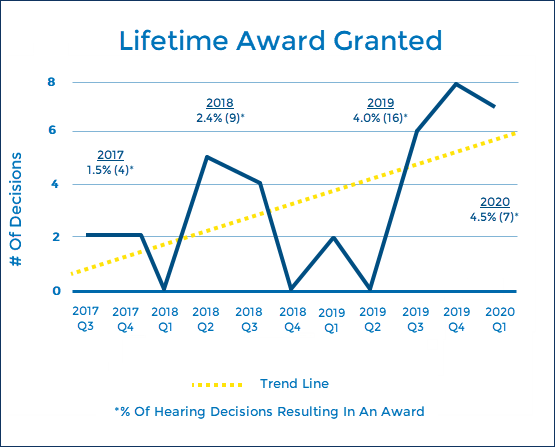 The Tribunal has again emphasized the obligation/duty on the part of an insurer to continuously adjust their file. The price of noncompliance remains most significant.

Ignore Your Assessors at Your Peril – In 18-009541 v Aviva, the Applicant sought an award on each of five treatment plans that the Respondent approved prior to the first case conference. In finding that a 25% award was warranted, the Tribunal was primarily concerned that the Respondent failed in their “ongoing duty to continuously adjust an insured’s file based on relevant medical information.” Specifically, the Respondent had medical evidence from its own IE assessor, that the applicant’s injuries are not within the MIG, and chose to ignore this evidence.

The Tribunal found that “once the respondent has evidence, especially from its chosen IE assessors, that the applicant’s injuries are not within the definition of the MIG, it cannot ignore that evidence and choose to rely on the evidence it prefers in order to deny the treatment plan. The respondent has a duty to treat the applicant fairly and not in an adversarial nature. I find that the respondent did not treat the applicant fairly by choosing the evidence it prefers to deny treatment.” An “aggravating factor” was the fact that in response to the LAT filing, the Respondent continued to maintain the MIG position, and also continued to maintain that the denials were in accordance with the Schedule despite a s.38(8) breach. Mitigating however was the fact of having resolved the issues at the case conference, thereby not forcing a hearing.

Price Of Another Year of Pain – In 18-011171 v Aviva, the Applicant, injured in a November 2016 accident, sought NEB from the July 2018 termination to the 104-week mark, in addition to a number of plans for therapy and assessments, totalling over $45,000, $13,379 of which represented the difference in a partially approved CAT assessment. The Tribunal ultimately awarded NEB to the 104-week mark and $20,264 in benefits and assessments, in addition to $21,167 in treatment and assessment already approved by the Respondent’s assessors.

The Tribunal found “ample evidence of [the Applicant’s] continuing disability…that her experience of everyday life has been profoundly changed and limited by her injuries.” There was found to be numerous flaws in the various IE reports. One assessor in particular opined against further facility based treatment for “‘this type of injury’ because it may be harmful…focusing on the nature of the diagnosed injury…rather than on the experience of the particular patient before him.” However, the same assessor subsequently found that a CAT assessment was reasonable, which “implicitly contradicts his position in earlier reports.”

In awarding a number of plans for treatment and assessments, the Tribunal found support for each in the reports of the Respondent’s experts. The Tribunal concluded, “Based on that evidence and the recommendations of its retained specialists, the insurer should have approved payment of everything recommended by their specialists rather than waiting for the results of a hearing. The applicant has had to endure another year of pain. I do not doubt that her complete recovery has been adversely impacted by this.” An award of 33% was granted, both on the previously approved plans as well as those required to be paid by the order of the Tribunal. “The “percentage reflects the year’s delay in approving treatment and assessment for the applicant recommended by the insurer’s experts.”