For research help reach out to us on Live Chat.

The Applicant sought reconsideration of a preliminary issue decision which found that he was time-barred from proceeding with his claim for ACB and HKB. Following the release of the Court of Appeal’s decision Tomec v Economical, the Tribunal sought further submissions as to how Tomec affected the reconsideration request.

The Tomec Lifeline – In 17-008493 v TD, the Applicant, injured in a May 2004 accident, was deemed CAT on December 8, 2015. Subsequently, the Applicant sought ACB and Housekeeping benefits (HKB) on March 21, 2016. The Respondent however denied same, relying upon a June 23, 2005 Explanation of Benefits in which it advised they were refusing payment for ACB and HKB.

In a June 2019 preliminary issue decision, the Tribunal found that the Applicant was barred from proceeding with his claim for ACB and HKB as he had failed to dispute the denial within the limitation period. The Applicant sought reconsideration, with submissions completed in August 2019. However, following the release of the Court of Appeal’s decision Tomec v Economical in November 2019, the Tribunal sought further submissions as to how Tomec affected the reconsideration request.

On reconsideration, the Tribunal found that Tomec “alter(s) the outcome of the Tribunal’s preliminary issue decision, but the findings also altered the focus of [the Applicant]’s request for reconsideration.” It was noted that Tomec “opines at length on policy rationales and what it considers to be ‘absurd results,’ pointing out that a ‘hard’ limitation…bars an applicant from receiving benefits before the applicant is even entitled to those benefits.” The original decision to bar the claim “leads to the type of absurd results contemplated by Tomec: where the time for [the Applicant] to claim his ACBs and HKBs (and the limitation period for him to dispute [the Respondent]’s pre-emptive denial) somehow both commenced and elapsed prior to [the Applicant] requiring the benefits or, as it pertains to enhanced benefits under the CAT designation, discovering his eligibility to make a claim for same.”

Allowing the Respondent to rely upon the pre-emptive 2005 denial “effectively means that [the Applicant] took too long to require ACBs and HKBs and, in turn, become CAT.” Further, to do so results in the “refusal to pay the benefit and [the Applicant]’s ability to actually make the claim would not be “inextricably intertwined” as required by Tomec.” While Tomec is “not the type of authority contemplated by the Tribunal to definitively show that ‘[the Respondent] is prevented from adjusting [the Applicant]’s claim proactively and notifying him that it will refuse to pay ACBs’ I find that Tomec does provide the lifeline to applicants whose claims for benefits were pre-emptively denied by an insurer prior to their condition deteriorating to the point where they actually require the pre-emptively denied benefits.”

A GAF Gaffe – In 18-003656 v TD, the Applicant, having exhausted the non-CAT medical limits, sought CAT determination. The Applicant further sought entitlement to ACB, HKB and 13 OCF-18’s including seven for chiropractic services, that alone totalled well in excess of $50,000. The Applicant’s assessors found that the Applicant had a combined WPI of 55%, including a 40% psychological WPI. In addition, they found him to have impairment ratings in concentration, persistence and pace that varied between Class 2 (mild) and Class 4 (marked), and that “where a condition fluctuates, the highest impairment rating should be used.”

In contrast, the Respondent’s assessors found there to be at most a 36% WPI, psychological being 15% to 20%, with a mild impairment in concentration, persistence and pace. The Applicant’s assessor’s psychological rating was based upon a Global Assessment of Function (“GAF”) of 41 to 50, as the assessor “believed that the Applicant was unable to keep a job for longer than a day or two on at least four occasions.” For their part, the Respondent’s assessor found a GAF between 60 and 70, which aligned with the rating from a psychologist who assessed the Applicant upon referral from his treating chiropractor.

The Tribunal discounted the Applicant’s assessor’s reliance upon the post-accident employment record, noting that same was “no different than his pre-accident work history. His post-accident work history is about the same as his pre-accident work history…(and the assessor’s) opinion is contrary to the applicant’s belief that he can work on a part-time basis, but does not look for part-time work because it does not pay well.” Overall, the Tribunal preferred the evidence of the Respondent’s assessor regarding the psychological impact of the accident. Accordingly, “giving the applicant the benefit of doubt”, this aspect would represent a 20% WPI, resulting in a combined rating of less than 55%.

In Trending – Stats on CATs

As of April 24, 2020, a total of 38 CAT determination decisions have been released, with 55% of the decisions in favour of the Applicant.

Of these, a total of 21 decisions involve Criterion 8 Mental or Behavioural Disorder, representing 58% of the CAT determination decisions, where 67% are for the Applicant. 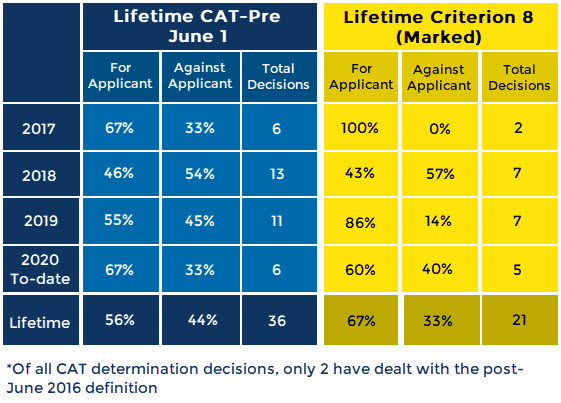