In this “Awards” Special Edition LAT inFORMER Issue, we feature 4 cases, two where a significant award was levied against the insurers as well as two where upon reconsideration, significant awards were rescinded. What is trending on awards from the LAT?

In order to provide a degree of context we begin by providing statistics on a historical basis from two points of view. 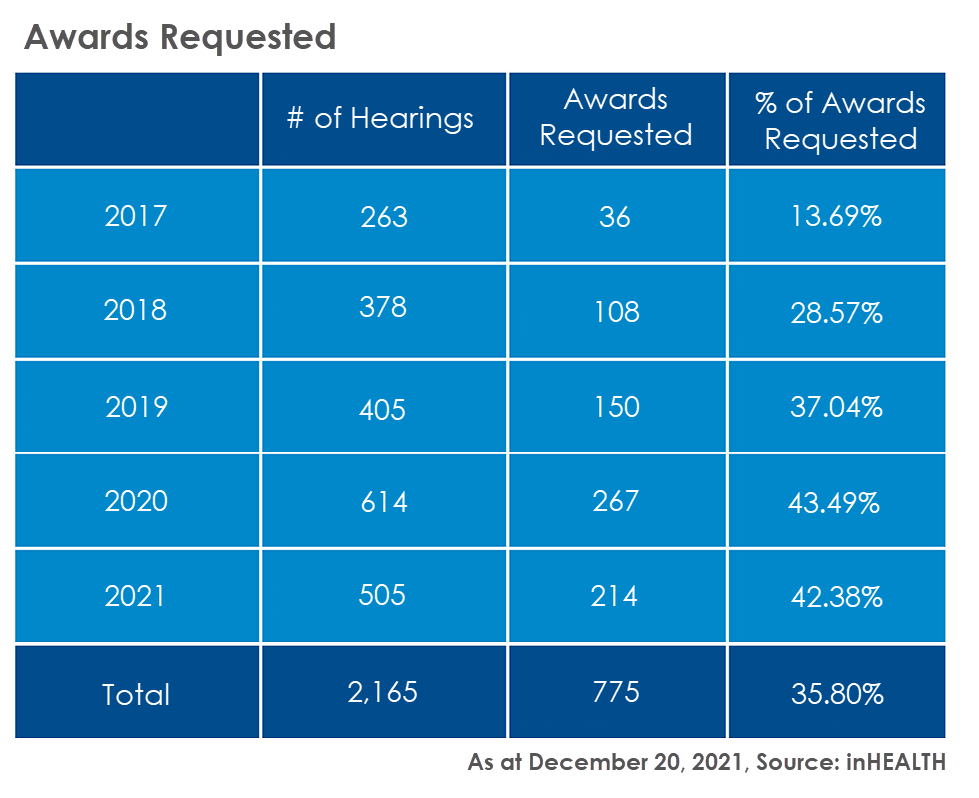 The awards granted remain fairly consistent year over year at approximately 10% of awards requested. The exception has been the current year where there is a significant decrease. Keep in mind not all decisions have been reported for 2021. 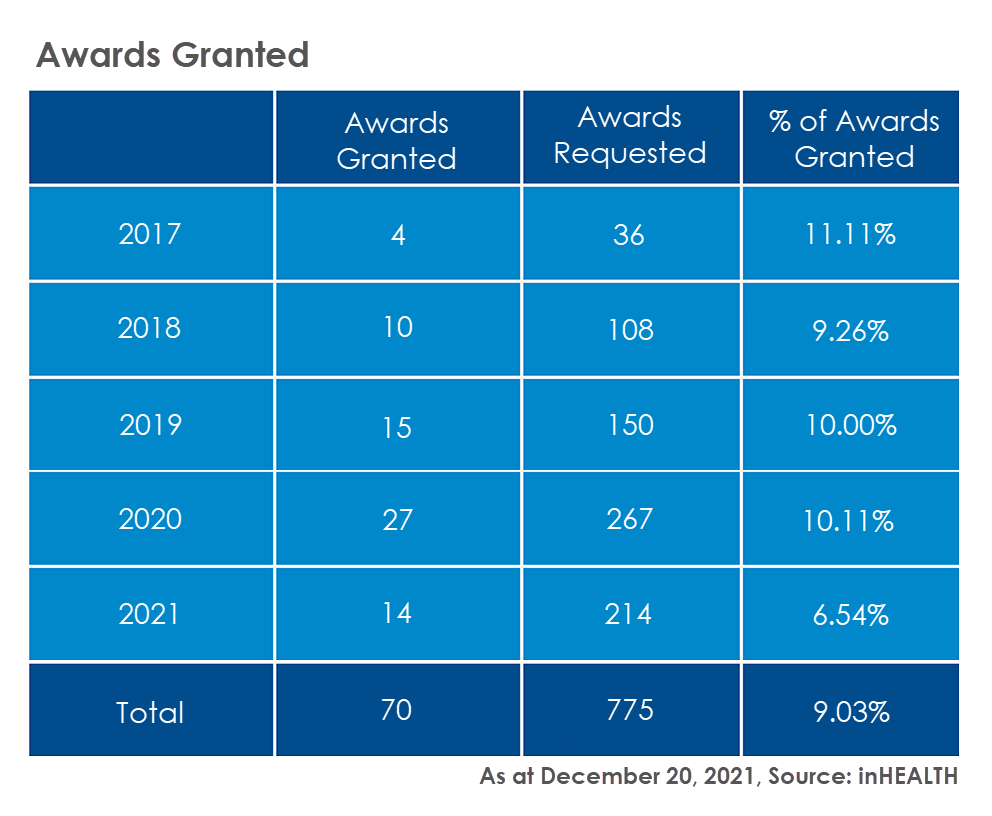 Advance your best case with an Outcome Analysis Report!

In January 2020, we first broke the news on Malitskiy v Unica (18-010164), where the insurer faced the single highest total award granted on ACB and home modifications based upon what was considered to have been “imprudent, inflexible, and immoderate” behaviour. Unica sought reconsideration on the ACB allocation and the award.

Once again, in breaking news, we bring to you the unreported reconsideration where the Tribunal revoked this award, finding rather that “none of the three…adjectives come to mind.” While the original decision did not specify, it was suggested that the 25% award would be in the vicinity of $70,000.

Incorrect ACB Allocation
The Tribunal also found that the original decision in error failed to properly consider the amount payable for ACB, having simply indicated entitlement of “up to $6,000 per month”, failing to consider the needed components of the total hours per month of each level of care as well as the mandated rates. Using the available documentation, the Tribunal in this instance was able to provide a calculation based upon actual hours and rates in accordance with the Guidelines. As a result, the original amount of approximately $111,000 was reduced to $44,335, a reduction of in excess of $67,000.

Error Impact on Award
It was noted that the ramifications of the ACB reduction for the award granted were also significant. The Tribunal opined that “it appears that [Unica’s assessor]’s recommendations were more accurate. Had the Tribunal calculated the amount of attendant care incurred at first-instance, I suspect its opinion of [Unica’s assessor]’s recommendations for attendant care would have changed. In turn, the major pillar supporting the s. 10 award would have crumbled.”

Error in Law
The Tribunal found that in general “the reasons supporting the award were not sufficient to justify the magnitude of the award and that the rationale provided significantly waters down the threshold of what constitutes an unreasonable withholding or delay of benefit payments by an insurer warranting an award”. Further, the Tribunal had “conflated the fact that [the Applicant] sustained a catastrophic impairment with the notion of entitlement to benefits, which is an error of law.”

Role of the Adjuster
The Tribunal also agreed that the decision “unfairly placed the adjuster in the role of a medical professional. “Insurance adjusters are not medical professionals and they should not be held to that standard…it is unreasonable and quite unfair to expect adjusters who come and go with some regularity to micromanage the assessments of qualified professionals to ensure that their reports respond directly to the specifics of a claim or else risk exposure to a s. 10 award if they do not.” The Tribunal also “tend(ed) to agree” with Unica’s assertion that there would be “significant concerns for the insurance industry with respect to the ability of insurance adjusters to be able to rely on the expertise of independent medical examiners.”

Discretion Requires Precision
While noting that there is discretion afforded the Tribunal to make such awards, “discretion, once exercised, requires precision…the reasons provided…as detailed throughout this reconsideration, fall well short of this standard.” Further, “the magnitude of the award was not proportional to the blameworthiness of the conduct or the vulnerability of the applicant and, considering there were partial approvals for both benefits, I find there is no need for deterrence since there was no advantage wrongfully gained and there was no harm.”

The Tribunal in its findings makes very clear the standard to be met in any considerations regarding awards against insurers.

Dropped the Ball – In Seepersaud v Allstate (20-000400), the Tribunal found that an award in the amount of $4,025 was appropriate, representing 25% of the total IRB payable. The Respondent’s “lack of conduct or engagement with the claim for extended periods of time—in adjusting [Seepersaud]’s claim can certainly be described as imprudent, immoderate and unyielding, justifying an award”.

The Tribunal found that Seepersaud had provided information reasonably required to initiate and calculate IRB, including s.33 requests, all in a timely manner. By May 2019 all documentation has been provided, however “Then, nothing happened.” Throughout the remainder of 2019, Seepersaud pursued the matter, including the provision of their own accountant’s report. It was not until May 2020 that the Respondent produced their accountant’s report.

The Respondent then provided three payments, the Tribunal noting as a result that they had remitted overdue IRB payments, with interest, in the amount of $16,100.05, with IRB continuing to date. It was further noted that “instead of conceding that it mishandled this claim by failing to communicate with its insured for months at a time and by waiting over one year to calculate an IRB despite having all of the requested documentation, [the Respondent] submits that an award is not appropriate.” The Tribunal rejected the submission that the insurer had “simply got it wrong. Rather, on the evidence, I find this is a situation where [the Respondent] simply dropped the ball.” The resultant delay and withholding of IRB “caused unnecessary stress and hardship…this delay can be attributed directly to [the Respondent]’s unreasonable mishandling…clear evidence of imprudent, immoderate and unyielding file handling, as it led to significant delay.”

Award Rescinded – In 18-011171 v Aviva, released earlier this year, we featured Price Of Another Year of Pain, in which the Tribunal awarded the Applicant 33% of benefits owed, noting that “The applicant has had to endure another year of pain. I do not doubt that her complete recovery has been adversely impacted by this.”

Upon reconsideration before a different adjudicator, the award was rescinded on the basis that the Tribunal had “misapplied the test for granting” and had made a factual error that would have resulted in a different decision being made. The Tribunal had indicated that an award is warranted “in cases where the conduct of the insurer has been unreasonable or wrongly motivated”. 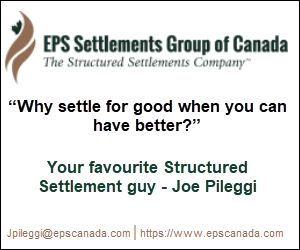 It was however noted that this was not the correct test of whether an insurer “unreasonably withheld or delayed the payment of benefits”. It was found that “the Tribunal did not appear to have a sound understanding of the test or the case law relating to it.” Further, “an award should not be ordered simply because an adjudicator finds that an insurer made an incorrect decision. This, however, is exactly what the Tribunal did in this case.” Accordingly, the award was rescinded.

And a cautionary note for those who rely upon the evidence discussed by the Tribunal, it turns out in this matter that a fundamental issue raised by the Respondent was never considered by the Tribunal. The Applicant was awarded a concussion management program, despite the fact that there had never been a Treatment Plan submitted for same.

The original decision makes no reference whatsoever to this essential factor, despite the Respondent having raised this defence in its submissions. Therefore, it was found to be “an error in law for the Tribunal to consider whether concussion management treatment was reasonable and necessary without first addressing whether the applicant had failed to comply with the section 38(2)… If an insurer cannot be liable to pay an expense before a proper OCF-18 is submitted…the Tribunal likewise cannot order the insurer to pay that expense in disregard of s. 38(2).” This is but one of several errors found within the original decision.

The Price of Non-Compliance

Ignore Your Assessors at Your Perils – In 18-009541 v Aviva, the Applicant sought an award on each of five treatment plans that the Respondent approved prior to the first case conference. In finding that a 25% award was warranted, the Tribunal was primarily concerned that the Respondent failed in their “ongoing duty to continuously adjust an insured’s file based on relevant medical information.” Specifically, the Respondent had medical evidence from its own IE assessor, that the applicant’s injuries are not within the MIG, and chose to ignore this evidence.

The Tribunal found that “once the respondent has evidence, especially from its chosen IE assessors, that the applicant’s injuries are not within the definition of the MIG, it cannot ignore that evidence and choose to rely on the evidence it prefers in order to deny the treatment plan. The respondent has a duty to treat the applicant fairly and not in an adversarial nature. I find that the respondent did not treat the applicant fairly by choosing the evidence it prefers to deny treatment.” An “aggravating factor” was the fact that in response to the LAT filing, the Respondent continued to maintain the MIG position, and also continued to maintain that the denials were in accordance with the Schedule despite a s.38(8) breach. Mitigating however was the fact of having resolved the issues at the case conference, thereby not forcing a hearing.